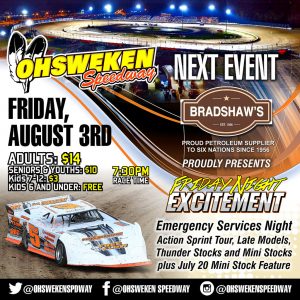 OHSWEKEN, Ont. (July 31, 2018) – The Action Sprint Tour is bringing its exciting brand of Sprint Car racing back to the track for the second time in six days as the tour begins the second half of its inaugural season at Ohsweken Speedway on Friday, August 3.

The event marks the second trip to Ohsweken this season after the inaugural race was contested at the Six Nations 3/8-mile oval back on May 18. In that race it was Ohsweken regular Aaron Turkey who scored victory.

The tour is coming off a thrilling race at Merrittville Speedway last Saturday night that saw 15-year-old Jacob Dykstra drive to Victory Lane after a furious battle that was at one point three-wide for the lead with Turkey and veteran racer Ryan Hunsinger.

With five races in the books, the final home stretch of five races to decide the inaugural champion starts on Friday at Ohsweken. Entering Friday’s race, St. Thomas, Ont. driver Jesse Costa is the current point leader. Although he is winless on the series, he has five straight top-five finishes on the tour. Turkey trails him by just 15 points for the top spot in the standings while veteran Shone Evans sits third, just 21 points back of the high water mark. Dykstra, who became the third winner in series history, after Turkey and Evans, currently sits fourth, but is just two points ahead of Hunsinger. Rounding out the top-10 through five races are Steven Beckett, Sprint Car rookie Paul Klager, Jerry Hill, Brad Herron and Hannah Ferrell.

Ohsweken is the only track of the six Action Sprint Tour hosts that also runs Crate Sprint Cars weekly with its Strickland’s GMC Crate Sprint Car division. In weekly competition, Costa is also the point leader over.

In eight weekly features so far this season, the division has seen five different winners. Delhi, Ont. native Holly Porter leads in that category with three victories while Costa has collected a pair. Dykstra also has a weekly win that came on July 13 while teenager Liam Martin got his first career win back on May 25 and Lucas Smith collected his first career checkered flag on July 6.