SCHEDULE UPDATE
Management from Southern Ontario Motor Speedway and officials from the Knights of Thunder series and Action Sprint Tour have mutually decided to cancel the Sprint Car portions of the event scheduled for October 9. The event has been replaced on both the KoT and AST schedules with an October 2 event at Humberstone Speedway.

“We look forward to working with the management at SOMS to create some amazing Sprint Car events there in 2022,” stated KoT and AST series director Clinton Geoffrey.

THE FALL CLASSIC
Already set to be a big event at Humberstone even before the additions to Saturday’s lineup, The Fall Classic presented by Nitro 54 Variety and Burger Barn will now feature two action-packed nights of racing. The two Sprint Car tours are set to race on Friday, October 1 and Saturday, October 2, along with two $2,500-to-win 358 Modified races, two $1,000-to-win Sportsman Modified races, two Street Stock races, and a Mini Stock race on Saturday.

Jordan Poirier has won all three Knights of Thunder events held at Humberstone this season, including a last-lap pass to steal victory from Jim Huppunen on July 31. Poirier has a host of challengers looking to end his winning streak, including 2021 Humberstone podium finishers Cory Turner, Ryan Turner, Huppunen, Travis Cunningham, and Josh Hansen.

EXTRA CASH
The crew from APTN’s popular Friday Night Thunder TV series has put up some extra cash for Sprint Car drivers to go after this weekend; each heat race winner during The Fall Classic will receive $100, and drivers who attend both nights will be eligible for three random draws for $100 each. Visit www.aptn.ca/fridaynightthunder for more information on the show which takes you inside the exhilarating and dangerous world of Sprint Car racing as seen through the lives of five Indigenous racing families.

CHAMPIONSHIP CHASES
Jordan Poirier heads into the weekend with a 44 point advantage over Ryan Turner in the Knights of Thunder standings, while Jim Huppunen is just 12 points behind Turner. Josh Hansen and DJ Christie hold spots in the top five, while Travis Cunningham, Cory Turner, Liam Martin, Tyler Rand, and Holly Porter round out the top ten. Jamie Turner is just two points behind Porter; he and several others still have a good chance to get into the top ten and claim a share of the 2021 points fund.

About the Pinty’s Knights of Thunder Sprint Car Series: Founded in 2021, the Knights of Thunder series is a traveling winged 360 Sprint Car tour based in Ontario, Canada. Each points-paying event on the 2021 schedule will pay a minimum of $2,000-to-win and $250-to-start, and selected events will be broadcast live on GForceTV. The championship winner will be rewarded with $5,000 and a Pinty’s VIP package for the 2022 Bristol Dirt Race, while 10th place in the championship standings will pay $1,000. The 2021 Knights of Thunder Sprint Car Series is made possible with the support of Pinty’s Delicious Foods, Corr/Pak Merchandising, Stoneridge Specialty Insurance, Hoosier Tire Canada, Burger Barn, Nitro 54 Variety, Strickland’s Brantford Chevrolet, and EPIC Racewear. Visit www.knightsofthunder.com for more information. 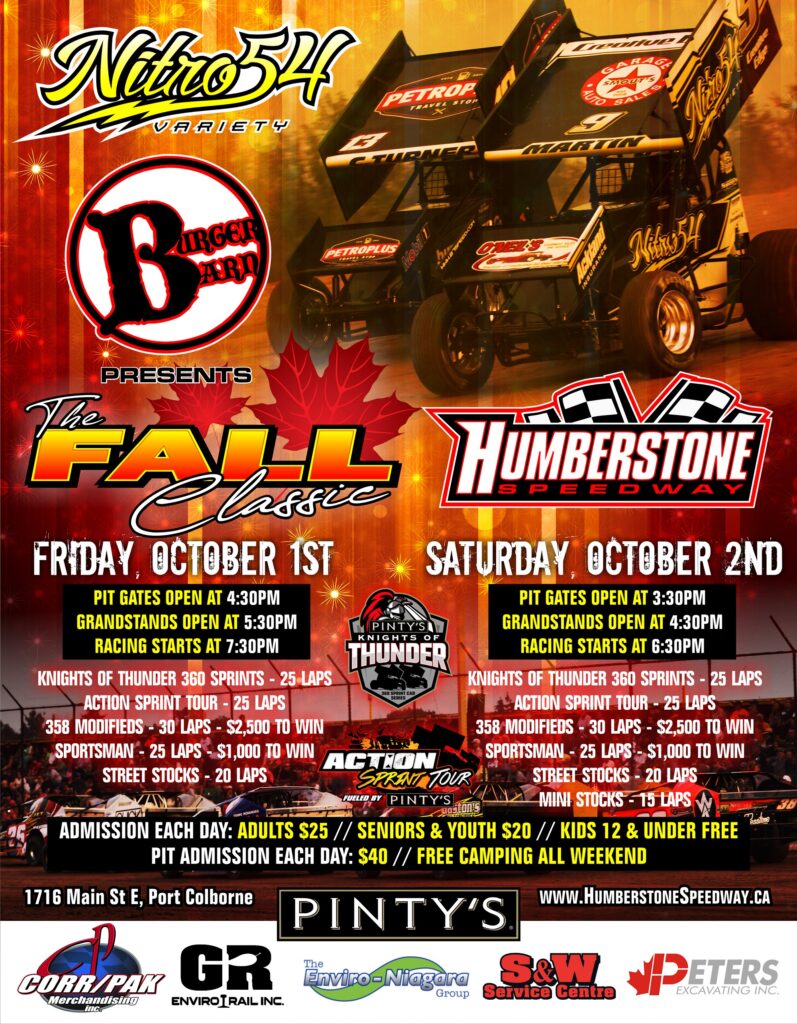